Behind the scenes with Prof Bernardo Villarreal-Ramos 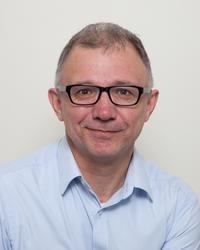 Professor Bernardo Villarreal-Ramos is Professor of Immunology at the University of Aberystwyth and is a member of VALIDATE's Network Management Board. In this VALID8, Bernardo talks about the importance of science communication, how nature can always surprise you and his fascination with phagocytic cells.

2 - What do you tell non-scientists you do?

I tell my friends and family that I work on research against bovine TB and that I’m looking for new vaccines that can protect cattle against TB.

3 - What drew you to studying vaccines?

I’m very interested in the immune response, I think it teaches us that evolution is an ever constant presence. For me, vaccination is about control and elimination of the pathogen. Antibiotics may help in the control and killing of pathogens, but pathogens evolve and overcome their susceptibility to antibiotics to the extent that antibiotic resistance is seen currently as one of the biggest threats to humans. On the other hand, the immune response, like the pathogen, evolves both at the individual and population levels. Vaccination is regarded as one of the most efficient ways of improving quality and length of life.

4 - Why is your work important and what could your work lead to?

My work will hopefully help us gain a greater understanding of the immune response to mycobacteria. This knowledge will hopefully lead to the development of safer and more effective vaccines. This would hopefully lead to improvement in productivity of cattle and reduce the zoonotic transmission of TB. My work also has the potential to identify novel diagnostics tools to distinguish between vaccinated and infected individuals. The cow has been used as a model organism for TB in humans; indeed, the current vaccine used in humans against TB was originally derived from cows. So, hopefully my work will also have applicability to the control of TB in humans. Within my group we work in closely in collaboration with colleagues who work in human TB.

5 - What is the most interesting thing you have learned in your job?

In scientific terms, I find it very interesting that when you carry out science you will always find things which do not necessarily conform to what is described in the literature, be it books or papers. Nature always has a surprise in store and that is always very interesting. For example, you can have phagocytic cells and bacteria in the same tube and, despite everything that is described in the literature, not all the bacteria are taken by the phagocytic cells, nor all the cells are infected, even in conditions in which one would expect the former or the latter to occur; to me this is fascinating.

In a more general, social aspect, I have also learnt that communication is king. We require communication for the writing of grants to get funds to do our science, no funds = no science; to communicate our science we need to write papers and the extent to which the writing affects the journal to which a manuscript is submitted. We also need to be able to present your work to live audiences.

I once heard my PhD supervisor say that nothing compares to the satisfaction of having an idea, testing it and finding out that your idea was correct. It really is a very exhilarating feeling. So, the best part of my job is when I manage to formulate a proper hypothesis, design the correct experiment and most importantly, get the appropriate result; it’s just a pity that this only happens once in a while.

7 - What is the most challenging part of your job?

Bureaucracy. When you work in science you get to learn that you are within a society with rules and regulations which, whilst sometimes hard to stomach, are there for a reason. The other rather hard to swallow part of my job is received wisdom, i.e. when everyone believes that an idea is correct because it was proposed by an eminent scientist but nobody has bother to test it. Sometimes, those are ideas are indeed confirmed, but there have been rather too many occasions in which that has not been the case and as a consequence the field has been unnecessarily delayed.

8 - Why are vaccines important (particularly in your field)?

Vaccination is, together with sanitation measures, one of the best ways of improving quality of life. Vaccines are also a major tool in public heath, indeed the current Covid 19 emergency illustrates the issue very clearly. In countries like the UK, it is thought that the development of a vaccine against this virus is the key to returning to our normal way of life.

In my field in particular, vaccination against bovine TB would prevent the transfer of Mycobacterium bovis, the agent of bovine TB, from cattle to humans. Also, some humans can infect cattle with M. tuberculosis (Mtb); whilst Mtb has reduced pathogenicity in cattle, it can still be excreted in milk and re-infect humans. A vaccine against bovine TB would hopefully break that cycle. This is particularly important in the case of Mtb which are resistant against antibiotics.

You can find more about Bernardo's research on his VALIDATE biography page.

There are more fascinating interviews with members of our extensive network of researchers on our VALID8? page. This is an ongoing series, so check back regularly.

If you are a member and would like to take part, you can email your answers to the following questions along with a captioned picture of your day-to-day work to validate@ndm.ox.ac.uk.